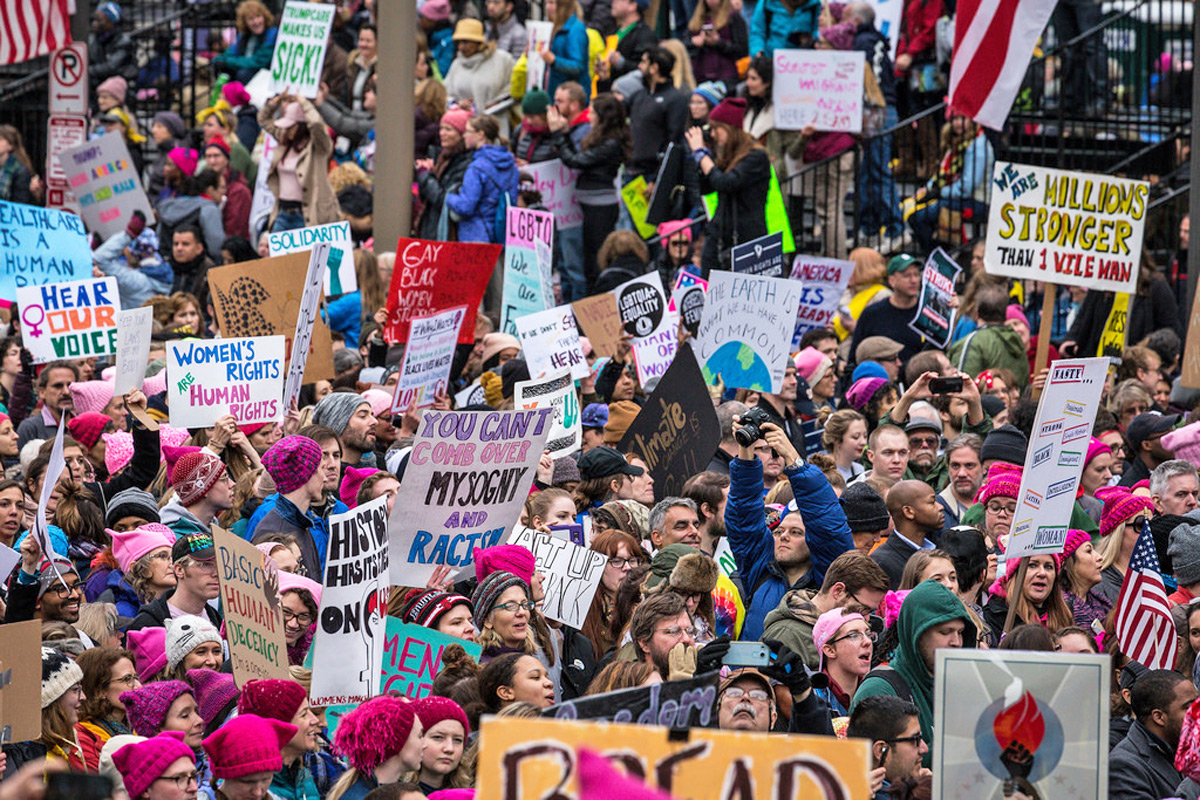 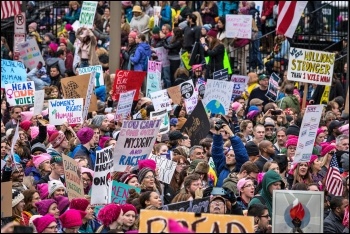 Women demonstrating against sexist US president Donald Trump, photo by Mobilus in Mobili/CC   (Click to enlarge: opens in new window)

Friday 2 March – finally home and looking forward to nine days off. It’s been a hard week, mainly because of the worry about getting to and from work in this weather, which I found incredibly stressful.

But, on the plus side, being snowed in at work gave me the chance to get to know my work colleagues a lot better, and we’ve had some good shifts together.

And thinking of my colleagues, a fellow support worker is back in tomorrow after being taken to hospital for hypothermia after trying to get into work by bus, and being told she was half an hour from death.

Another colleague came in today despite being unwell, and yet another who came in to cover someone, and who will now be working for days.

Also, thinking of my co-workers who struggled in for the night shift. One fell on the ice tearing her Achilles tendon and faces a month off work.

The day shift worker who walked for an hour to make it on time for the beginning of her shift at 7am. The workers who changed their plans to ensure our service users were never abandoned.

Today I read about a care worker who froze to death trying to get to her clients. Support workers understand this dedication to our service users, we go above and beyond.

To our support team I just want to say thank you for the last few days. It’s been bloody hard, but I’ve enjoyed working with you, and have enjoyed getting to know you all better as a relatively new day shift worker.

Mothers, daughters, grandmothers, partners – young and old – all made that extra effort to get to work this week any way we could because we care.

And our worth for this dedication and commitment? Minimum wage, be it night or day, sun or snow. Value these women because they are worth more than you can ever imagine.

It’s difficult as a woman to be faced by your own oppression. I find myself all straight-backed and indignant even thinking about it.

Even more so when we are told that it was 100 years since some women were “given” the vote. Given! Like it was a nice box of chocolates for just being us!

We struggled, we fought, we campaigned, we debated, we suffered… We weren’t given it, we demanded and took it. We must be cautious of the “given” and remember that in a ‘democratic’ system it is a right.

We look with horror on the ancient Chinese practice of foot binding. Young girls suffered lifelong deformities as their feet were forcibly twisted into the lotus shape. They subsequently walked with a tottering unsteady gait, interpreted as a sign of status and beauty.

Today we have not, however, progressed very far. In 2016 a receptionist at a corporate finance company was sent home without pay for not wearing high-heeled shoes. Her protests and nationwide support led to a parliamentary inquiry and recent debate.

We can all reject this sexist, demeaning ideology and make the personal the political. So! Women of the world, unite! You have nothing to lose but your blisters and in-growing toenails!

So, come on sisters! Conquer the world in Crocs, tango in trainers, man (haha) the barricades in wellies, and go ape in sensible shoes!

The local paper in Whitstable reported on a “crooked solicitor and his wife” who stole several thousand pounds from clients. The woman was spared jail because of the effect on the couple’s children.

While I welcome Judge Adele Williams’ sentencing decision, I would however like to highlight how unfortunately many women are not so lucky – and may I suggest it is often working class women and those with mental health issues or addiction problems who are sent to prison.

Most of these women – 84% according to 2016 Ministry of Justice figures – have committed non-violent crimes. Some convicted of stealing food – in one case just a loaf of bread and a packet of ham – to feed their families, or non-payment of council tax.

This year, in marking International Women’s Day, the effects of sending women, especially mothers, to prison should be highlighted. In 2007 the Prison Reform Trust estimated 18,000 children are separated from their mothers each year by sending women to prison.

Despite many recommendations on reducing numbers and the need for community-based solutions, it would seem the children are also being punished – and will continue to suffer even when the mothers return, displaying insecurity, anger and anxiety issues.

We should make the children the priority when sentencing mothers for non-violent crimes. What good will come out of prison?

Better to offer a local, community-based solution to give support and try to stop reoffending. Unfortunately, austerity overshadows everything and this needs to end promptly or we will be sowing seeds for more problems in the future.

Iain Dalton’s article in the last Socialist, ‘What’s behind the surge in eating disorders?‘, made important points about the material hurdles capitalism puts in the way of healthy eating. But it’s also worth expanding on his point about “the general context of misogyny and alienation under capitalism.”

Self-harm among young women aged 13 to 16 rose 68% between 2011 and 2014, according to the British Medical Journal’s latest study. Young women are now about three times as likely to self-harm as young men.

Suicide is also on the rise among women. In Britain men are three times more likely to die by suicide. But the Samaritans have found that suicide among women in Wales increased 62% from 2014 to 2015.

Women are shouldering 85% of benefit cuts, according to a 2016 report by the Fair Deal for Women charity coalition. Austerity is scrapping public sector jobs – mainly women’s. It is closing women’s refuges. Prominent figures and institutions continue to attack women’s rights and social standing worldwide.

So are these figures any wonder?

Capitalist society robs ordinary people of full control of their lives in every sphere, from work to home and beyond. Marxists call it ‘alienation’. It is doubly true for women due to capitalism’s enduring sexism, part of its foundations.

In the absence of a visible route for constructive, collective struggle, it is inevitable that some people will seek to assert control over their lives through individual action – often on themselves.

Even the positive or harmless aspects of this – such as the growing popularity of healthy and ‘ethical’ eating – can turn into their opposites, including eating disorders. Anyone can fall victim, but working class women are perhaps the worst affected.

Jeremy Corbyn and the trade union leaders should take note. Without collective struggle to end crisis-ridden capitalism, suicide, eating disorders – even terrorism – are its fruits.